A mailbox tale (or three)

This morning, I woke up at my usual early time. I got dressed and went to the front door to put on my shoes for my morning walk. As I looked out the windows, I noticed that the streets and sidewalks looked...shiny and wet. I hoped they were wet, but I discovered upon leaving the house that they were icy. So, I skated down the sidewalk, detoured onto the front lawn to walk halfway down the driveway, and noticed that our mailbox was once again lying on its side.

Our mailbox is probably the worst design ever invented. However, our subdivision covenants require that we all have the same mailbox. Access to the mailboxes is allowed only by the mailbox trolls (also known as Sid&Nancy, also known as the Design and Planning Committee (or some such nonsense), also known as the house plan enforcers, but that's a story for another day). Here is a picture of a similar mailbox: 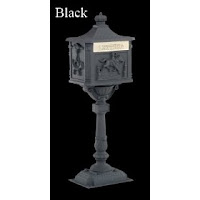 It looks lovely, but is not very durable. Three years ago, I was at work one afternoon and noticed that I had a voice mail message. The message was something on the order of this:

"Hello, this is Loopy Seagull*, Mayor of Whoville (the town where we live). I'm calling to let you know that this morning, my mother-in-law was at a garage sale on your street and when she was leaving, she backed into your mailbox and knocked it over. Of course, we will repair or replace the mailbox. Please give me a call and let me know what you would prefer."

I thought this was a mistake. We live on # East XXXX Drive and we're always getting mail (or free lawn aeration) for the people who live at # West XXXX Drive. I hadn't seen any signs for garage sales that morning, so I was confused. But, as it turns out, he had the correct house. Our mailbox was knocked over by the mayor's (elderly) mother-in-law. I thought this was quite hilarious...my husband was not so amused. He saw only the downed mailbox, while I appreciated the silliness of having to ask your water clerk to look up a resident's phone number so you could call and tell them that your mother-in-law had knocked over their mailbox. Mayor Seagull contacted the mailbox trolls (who were, of course, on vacation) and finally, after about 10 days, our mailbox was replaced and we were getting our mail again.

A few months later, a friend had come over for dinner and a movie (and a couple beers, of course). As she was backing down our driveway, we heard a CRUNCH. Our mailbox is a minimum of 60 feet from the house, so it was a pretty good hit. But, she only scratched the mailbox - it was still standing.

Part of the problem is that both our street (we live on a cul-de-sac) and our driveway are curved. So, it is extremely difficult to back down our driveway without veering onto the grass (or into the mailbox).

The next incident was about a year and a half ago. I was working part time, and my daughter would usually go to grandma's for the two days a week that I was working. Sometimes, grandma would come to stay with us. Whenever she did that, one of my sisters-in-law, who lives nearby, but with whom we don't interact much, would come by with her little boy and hang out at our house for the afternoon. Without our knowledge or permission. Now, on one hand, she's family, and so what's the big deal? But on the other hand, she doesn't spend any time with us at our house at all. We only see her at her parents' house or maybe at one of her sisters' houses. So it would kinda irritate me and really irritate my husband when she would do this. I was at work one day, and MIL was at home with S. I got a phone call from MIL, who told me that SIL had backed over our mailbox. MIL, who is a sweet, kind, non-cussing, good Catholic lady actually said "Shit." This time, because it would be cheaper, SIL's husband (the evil Chad) had to come over and take the mailbox to the welder for repair and then come and reinstall it. FYI, I hate the evil Chad with a passion, which is part of the reason we don't interact with SIL much.

So, the mailbox is down again. I don't know how it got that way, but maybe the salt trucks hit it. Or maybe our neighbor's daughters' teenage friends backed into it. Or maybe the weld failed and the ice became too heavy and the stupid thing just fell over. Who knows? Now I won't be getting my mail for a few days...

*Names have been changed to protect the upstanding citizens. Nancy of Sid&Nancy and the Evil Chad do not deserve protection...


UPDATE: According to my husband, the mailbox is gone (although the base is still securely attached) and in its place is a white post with a platform held up by some sandbags. I'm beginning to think it was the salt truck...I don't think the village of Whoville likes our mailbox. They're going to have a tough time fixing the mailbox without that base...
Posted by areyoukiddingme at 7:38 AM