It occurs to me that I know only a few people who have had no trouble conceiving and carrying babies. So, in honor of those of us for whom conception and live babies don't come naturally, I would like to salute the following people:

My sister, who married late, and decided after a year of unsuccessful trying, that intervention was not for her. Thank you for bringing two of the smartest, most adorable, most hilarious little girls from China to be a part of our family.

My friends J and S. The first people I knew who had to terminate a pregnancy due to a severe defect. They were totally undeserving of such sadness. Now, they have 2 beautiful children.

My friends M and D. Their first pregnancy ended in an early miscarriage. Their second pregnancy occurred at the same time I was having my miscarriages, so it was bittersweet for me. Their son was born 3 weeks early. Their daughter was born 2 weeks early. They both had breathing issues at birth. Their second son was born this month, and had some sort of infection. I hope they're done having children, as I can no longer take the stress.

My friends M and G. M tried so hard for so long to have children. She finally went for treatments, and happily gave birth to twin girls. I saw her heart breaking every time she saw a baby and I am so happy she got her dream.

My aunt M. For probably 7 years, she tried to have a baby. She and my uncle eventually adopted. But they never gave up, and 8 years later, after at least one D&C (that I know of, but I was only 10 at the time), succeeded in having a successful pregnancy.

To all of us who have suffered a loss, be it a miscarriage, a chemical pregnancy, a still birth, or the death of a child. While we have gotten to experience the joy of a pregnancy for at least some duration, we understand the difficulties involved in creating the family of which we dream.

Finally, to all of those who have not yet realized their dream. My hope for you is that it will not take you much longer.
Posted by areyoukiddingme at 7:43 PM 11 comments:

I love the news!

I was watching the news the other day. They were running a story about a rash of car burglaries in a nearby town. It was somewhat distressing that the thieves were stealing from cars in driveways, right next to garages. It's generally a pretty safe town, and so the residents were concerned. They had interviews with 2 teenage girls. One had her purse stolen from her car. They took the cash and then threw her purse and contents out along the side of the road. The other girl was upset that someone had stolen her new digital camera. The news report wound up by asking for any tips and by reminding people to lock their cars.

You're wondering what it was I found about this news story that's worth commenting on, aren't you?

At no time during this 2 minute segment did anyone, including the police chief who was also interviewed, suggest that maybe it would be a good idea to remove their valuables from the car before leaving it.

I was also recently discussing with another woman how surprised people are when they leave their purse in a shopping cart and someone steals it. For God's sake - it wasn't that long ago that someone stole a BABY from a shopping cart (if I remember correctly, the guy didn't make it out of the store, but still)! Purses are generally easier for the thief to dispose of - why wouldn't they take what you're essentially offering?

Moral of the story: If you don't want people to take your stuff, don't leave it out where they can see it.
Posted by areyoukiddingme at 8:20 PM 4 comments: 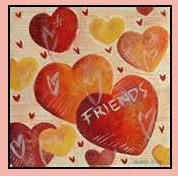 Thanks to Martha for the Friendship Award!


The only rule is to pay it forward to 8 other bloggers.

Prosy
Nancy
Antropologa
Eden
Bottoms off and On the Table
Fat Chick
Kandi
and finally, anyone else who might be reading...because we're all friends here!
Posted by areyoukiddingme at 9:55 PM 4 comments:

What to complain about today?

Well, let's start with the easy stuff...for the second time in a year, I threw up. Not that significant an event, generally, but prior to the previous occurrence, I had not vomited in 15 years. I really hate vomiting. Of course, I have become a little more immune to it, since I spent all of Wednesday night cleaning up after my little germ factory, who started the whole game. 5 bed changes, 2 loads of laundry, 7 costume changes, and I finally got to bed 7 minutes before my alarm would normally have rung. Bright side: Extra day off of work.

Second, got my property tax assessment today. Apparently, the county where I live is unaware that there is a fucking recession going on. And that the recession is directly due to the fallout of the subprime mortgage issue. And the subprime mortgage issue has directly led to a reduction in property value in most areas of the country. Nope, my county is completely clueless, because not only did they reassess our home's value for the fourth year in a row, they increased the market value of our house for the fourth year in a row. Guess who's moving? My husband states unequivocally that he will not pay more in taxes than he would pay in rent for a decent apartment. Last year, we were pretty close to his breaking point. This year, we've reached it. Bright side: Um...I like to look inside other people's houses? New furniture arrangement? Maybe we'll move closer to work?

Finally, I have nothing to do for Easter. Usually we go to my in-laws, but they went out of town to visit my husband's grandmother. Although, even if they were here, I'd be at home anyway, due to this plague inflicted on me by my charming daughter. We'll still be coloring eggs and the Easter bunny will visit. Bright side: If I'm sick, I don't have to feel guilty about not going to church.