...just for Nancy, who reminded me that I've had nothing to say lately.

I'd just like to say that Andrew Zimmer is crazy and I don't understand why people eat pork rinds. Normally, I wouldn't be watching stuff like the food channels, but circumstances in my house have taken a turn for the better today:

MY HUSBAND IS STAYING HOME WITH US!!!! Hoooray!!!

He has finally had enough of working 3 states away. Our girl will be done with daycare (at least for now; somehow I think DH will find it necessary to start another career sooner or later). I will have my partner, my love, my lover, and my lawn guy back full time!

So here's a whole lot of sunshine in my life today...How's your week going?
Posted by areyoukiddingme at 8:19 PM 11 comments: 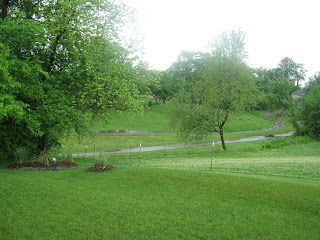