Where I make you look at my vacation photos...now with more accurate text!

(Wow. Two posts in two days. Probably won't have anything else to say for the rest of the year...)

For our first real vacation in 8 years (since our honeymoon), my husband and I decided to visit Santa Barbara, California. I thought he'd want to lounge on the beach and watch the days go by, but he made several suggestions on things to see. That fits in with my preference for vacations (seeing everything I can possibly pack in), and so I set to planning.

We arrived in Santa Barbara in the evening, and ate dinner on Stearn's Wharf. 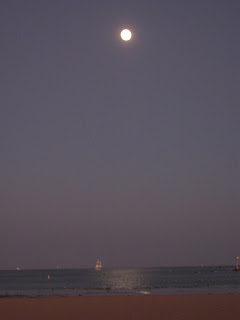 During the day, Santa Barbara was beautiful...and wonderfully cool compared to the 90+ temperatures in the midwest. 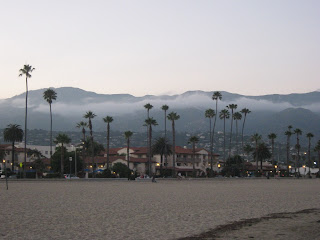 We explored a bit, and ate at Joe's Cafe. Apparently, it's the oldest restaurant in Santa Barbara. We were only eating because we needed something to do before we could go to our first wine tasting. We visited Jaffur's. The wine was delicious, and they gave us some pointers for additional wineries to visit. So we made our way up to the Brander vineyard, through some beautiful countryside. 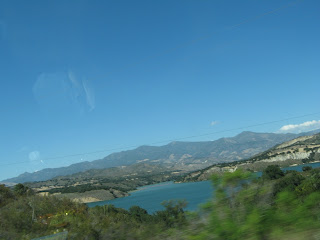 I was loving my smartphone - not only for its GPS capabilities, but because if I became a Facebook friend of Brander, they gave us a bonus tasting of a $50 bottle of Cabernet. That alllllmost enticed me to buy a $50 bottle of wine. My husband, however, varied from his usual preferences and bought a bottle of white wine.* 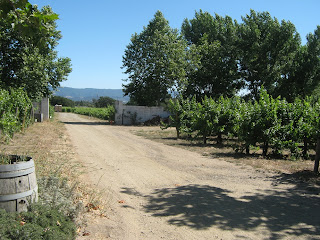 The next day, we drove up the coast to San Simeon. We took the most scenic route, so we could visit the wine ghetto in Lompoc. Several wineries have tasting rooms in the middle of an industrial area behind a Home Depot - thus, wine ghetto. We enjoyed some really good Mexican food and samples of wine. There, I learned how important it is to let wine breathe (very!) and my husband bought a bottle of red.* Then we continued up the coast and stopped at the beach at Morro Bay. 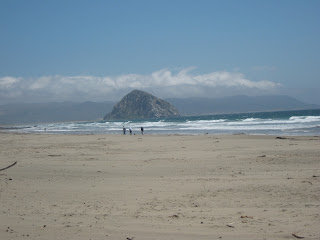 The next day, we visited the Heart Castle. It was a most amazing place. The tour guides were great, and the house and gardens were incredible. Of course, I felt compelled to read up on Hearst after visiting, and he was certainly an interesting character. I don't think I would have liked him very well, but I suppose he must have been charming in a way that can't be conveyed in a biography. 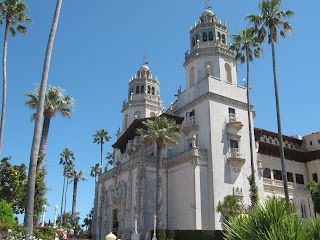 Before starting off on our next adventure, we took a short detour up the coast to check out the elephant seal rookery. There are two things to know about elephant seals, as far as I am concerned. They are very loud and they are very stinky. We didn't stay long. 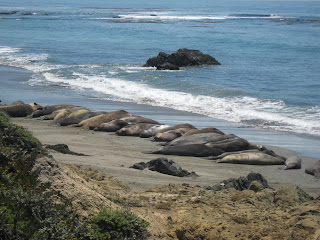 We drove across California to Visalia, where we enjoyed the many points my husband's travels have earned him with a free hotel stay. Visalia is about 40 miles from the Sequoia National Forest, which is where we intended to visit. We passed the many orange and lemon groves, fields full of cherry trees and olive trees and strawberries...we wanted to stop and eat everything! Along the way to the National Forest, we passed Lake Kaweah. 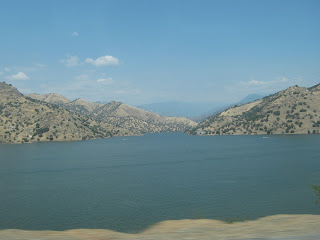 We stopped in Three Rivers because they were advertising a Hot Dog Festival that would begin at 10:00. We got there around 9:50. Here in the midwest, when something begins at 10:00, that's when we expect the food to be ready. Apparently in Three Rivers, that's when they fire up the grill. Fortunately, they had a tiny museum with plenty of things from early settlers to inspect while we waited 30 minutes for a hot dog. 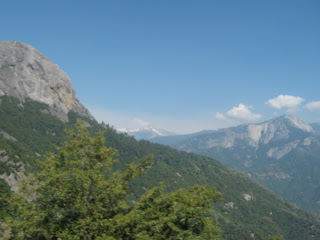 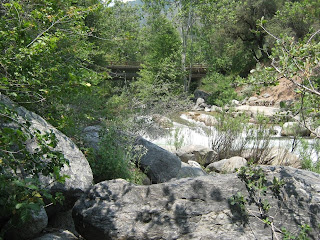 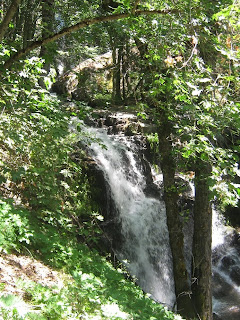 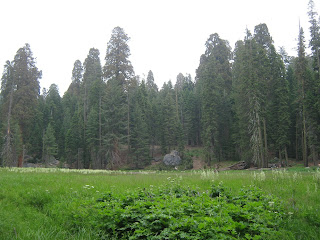 and incredible rock formations. This one was called Beetle Rock. 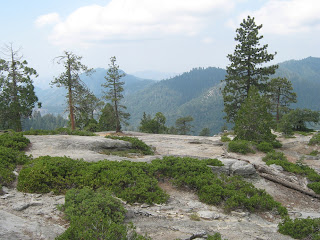 I don't have Photoshop on my home computer, so I can't show you good pictures of the cave we visited. I can tell you, though, that if the national park service tells you that it's a fairly strenuous hike, you should believe them. I can also tell you that stalactites stalagmites** (which apparently take hundreds of years to grow up) look very much like stone dildoes. 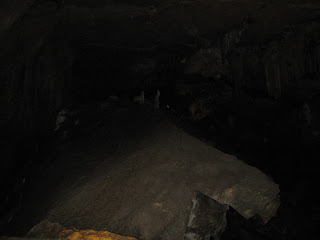 My husband was surprised to learn that he wanted to return for the second day. We saw a very small sample of the park, and if we didn't have so many more places to see on this earth, I'd go right back. 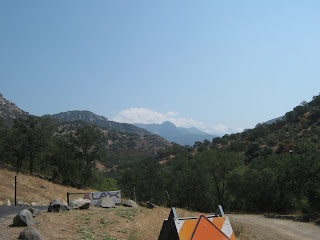 After that, we returned to Santa Barbara for one last night. We found a beautiful beach, and spent some time there. 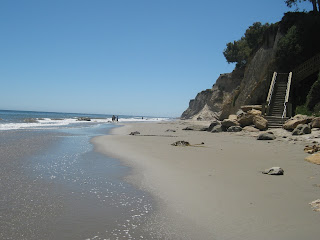 And for those of you who remember what I was doing last summer, I saw this on State Street when we were out and about buying t-shirts. I don't know what it was, exactly, but I assume it's a drinking establishment. It was too early to tell... 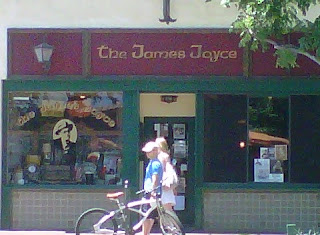 It was a wonderful vacation. There were many things that struck me, though. First, gas prices in California were not as expensive as I expected them to be (at least around Santa Barbara). Second, vacations are very expensive. I had no idea. I'd better vacation more often so I can keep up with the prices! Next, I should probably retire and drink wine all the time. It seems to be my life's calling. Finally, I love avocados!

Next week, I'm off to Wyoming for a class. Expect more pictures of mountains.

*My husband bought the wine. I drank a good portion of the wine. Just so we're clear.

**Thanks to Valery for correcting me and giving me a way to remember the difference between stalactites and stalagmites. It was so obvious - tits hang down!
Posted by areyoukiddingme at 4:43 PM 15 comments:

Here is a sampling of 24 hours of my life:

Me: Yeah. We did a round of IVF last November. It didn't work out, obviously.

Daughter: (*takes knife, slides it in*) Mommy, I thought you were going to grow me a baby in your belly.

Me: I tried, honey. It just didn't work out.

Daughter: (*gives knife experimental twist*) You were supposed to grow me 2 brothers and 3 sisters.

Me: I would have really liked to do so, but we don't always get what we want.

Daughter: (*fully rotates knife a few hundred times per second) But I'll be lonely when you die.

Coworker/mother of my daughter's "boyfriend": I just got back from the doctor's and "boyfriend" is going to have a little brother or sister next spring!


Clearly the universe is having issues with me this week... Sigh. Hope that's over with.
Posted by areyoukiddingme at 8:12 PM 13 comments: