Inspired by Geohde, today I am sharing a snow anecdote. 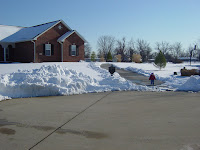 Last January, we had a series of snowstorms, which is somewhat unusual in this area. Mostly, we get ice storms, or snow storms of an inch or so. This does not inspire me to shovel our very long driveway. We live in a lovely little town where they plow our subdivision almost immediately. So one Friday, I picked up the little menace (uh, I mean, my daughter) after work (probably early, because it was snowing hard) and drove home. We were happily tucked in to the nice warm house, so I peeked out the window to check the state of the weather. There was about 5 inches of snow on the ground. Then I looked a little farther. I live at the end of a cul-de-sac, and it seems that the snow plow had come through. Normally, I see the pile of snow that ends up at the end of my driveway as just what happens when the snow plow goes by. But this time, there was a 6 foot snow mountain directly in front of my driveway. As you can see from the picture, it's not like they can't tell there's driveway there - they made a point of not covering up my mailbox. Also, across from me there is not a house, but rather a large stretch of my neighbor's front lawn (i.e. a perfect place to deposit excess snow).

It was at this time that I realized that I am completely crazy. I saw the snow mountain and I lost it. I got on the phone and called the public works director for my town. Now, he wasn't in, but I left him a lovely message. It was something on the order of this.

"I appreciate the speed with which you plow the streets in my subdivision. But, is there some reason that your drivers feel the need to deposit all the snow from the entire street in MY DRIVEWAY?!? Now I'm going to have to go out and clear a six foot snow mountain from the front of my driveway. By myself. With a shovel. In the future, I hope you will recognize that there is a large stretch of street with no driveways directly across from my driveway, and put your snow there."

By the time I finished, I was pretty much yelling into the phone. So, I took all of that energy (anger) and dug myself a path down the driveway. As I got about 1/10 of the snow mountain moved onto that pile around the mailbox, the snow plow pulled up. The guy sat there in his truck for a couple minutes - and at this time, I was practically crying with rage - then he got out and said, "Uh, we can move that snow for you." I said, "that's nice of you to offer, but I've already called your boss to complain about you leaving snow in my driveway. But if you'd like to move it, that would be great." So, while they moved the giant snow pile from the front of my driveway to the front of my house*, I continued to shovel the driveway. I hope, now that it's snowed 3 times already (just enough to make the grass a little white, nothing much), that they will remember not to plow the snow into my driveway this year.

Also, I did call back the public works director and apologize for screaming into the phone, and tell him that his guys had come to clear out my driveway. So, even though I'm crazy, I hope I remain polite. But, I'm pretty sure they just think I'm crazy, because when I called this summer to inquire about random drops in my water pressure, I never got a call back.

*The picture shows my 30" tall daughter standing amidst the snow mountains, which upon redistribution, were reduced to a mere 4 feet tall.
Posted by areyoukiddingme at 12:58 PM